The global wildlife trade is actively spreading a deadly disease that could cause hundreds, if not thousands, of the world’s 7,000 known species of amphibians to go extinct unless we take immediate action to combat its spread. This disease is caused by two species of pathogenic chytrid fungi, Batrachochytrium dendrobatidis (Bd) and Batrachochytrium salamandrivorans(Bsal), which were recently introduced to amphibian populations. These fungi thrive in wet cool environments, and amphibians in at least 60 countries have already been exposed. 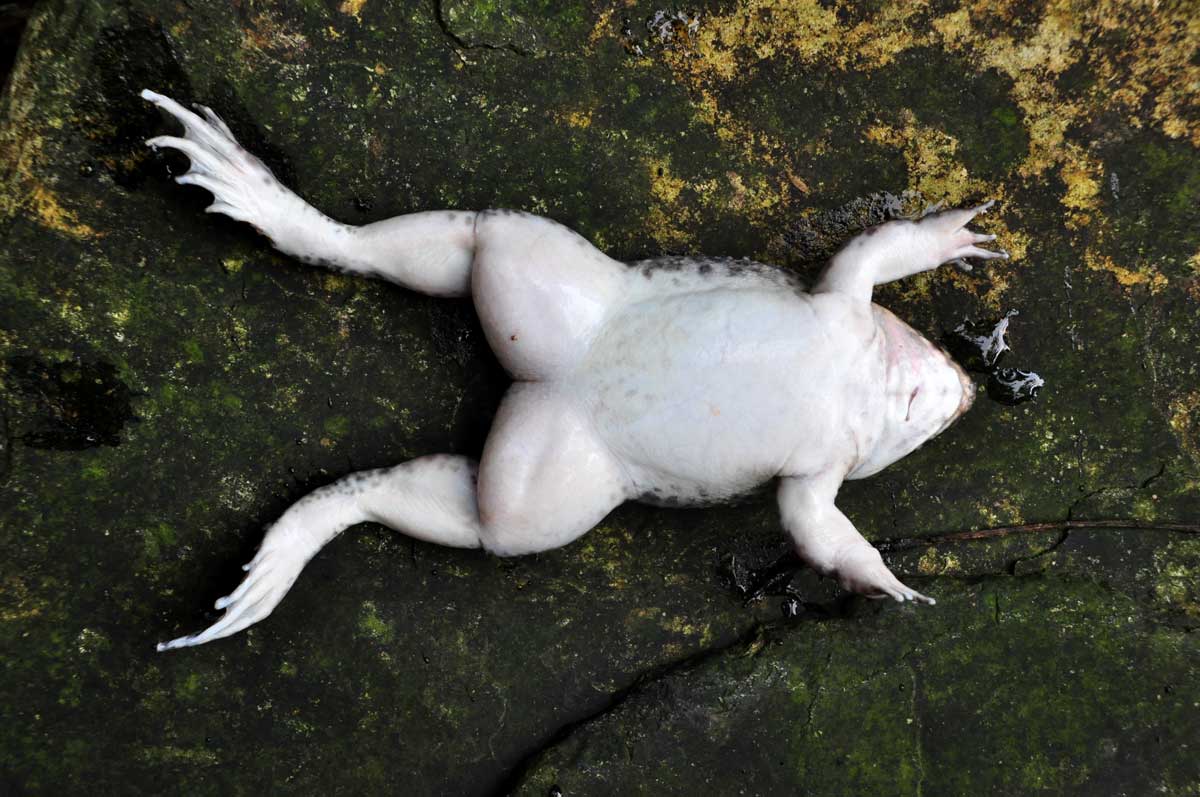 Every year, millions of amphibians are traded globally for use as pets, food, and research, without any required disease screening prior to transport. In each shipment, the number of amphibians can range from one to many thousands and must be quickly released to the importer. Bd and Bsal are invisible to the naked eye, and infections rarely cause visible symptoms prior to death. Therefore, genetic sampling and laboratory analysis are the most common detection method. Rapid, cost-effective chytrid detection methods are urgently needed to stop infected animals and contaminated shipping materials from entering the USA to reduce the threat of disease to native biodiversity.

Amphibian chytrid fungi are lethal to frogs and salamanders, and we must be able to detect its presence before we can eradicate it from infected animals. This challenge seeks innovative solutions to rapidly confirm and quantify the presence of chytrid fungi (Bd and Bsal) through non-invasive techniques in material imported into the United States. This includes detection on live animals, in water samples, and on surfaces of shipping containers (cardboard boxes, plastic bags, etc.). Detection is the first step towards a longer-term goal of developing treatments to safely eradicate Bd and Bsal from large commercial shipments of live amphibians that are imported for human consumption.

There are three focus areas of this challenge:

Amphibians are purchased as exotic pets, for human consumption (as frogs legs), and biomedical research subjects, and therefore, cannot be damaged in the detection process. These animals must be released to importers as quickly as possible following their arrival in order to protect their health (in a matter of a couple hours, or less, following importation). Currently, the time required to submit DNA samples to a laboratory and obtain results can be days, if not weeks.

Similar to the current Bd/Bsal detection methods on a live animal, a water filter sample must be collected and submitted to a laboratory for molecular analysis where the presence of pathogen DNA can be confirmed via PCR. Each sample can cost approximately $20-$40 to have processed, and low pathogen concentrations may dip below current genetic detection limits to accurately and confidently identify the presence of Bd/Bsal in water. We invite solutions to test and detect Bd/Bsal in water using low-cost techniques with a fast turn-around time between sample and result.

This challenge seeks innovative approaches that provide fast results after sample collection, the ability to test many samples per shipment, and a low price per sample.

The ability to quantify the pathogen load is also desired, though not a required capability of a successful solution.

Global spread of the amphibian chytrid fungi, Batrachochytrium dendrobatidis (Bd) and Batrachochytrium salamandrivoran (Bsal) is catalyzing the greatest disease-driven biodiversity loss in recorded history. These pathogens are amphibian parasites and cause the emerging infectious disease chytridiomycosis, disrupting the form and function of the amphibian’s skin and often causing death to their amphibian host. Bd and Bsal spread by the release of aquatic spores that can swim towards a new amphibian host. Infections can be passed to new animals through direct skin-to-skin contact and by exposure to material contaminated with live spores, such as water. Hundreds of species of chytrid fungi exist around the world and many feed on decomposing organic matter in the environment, but Bd and Bsal are the only two species known to attack live amphibians. 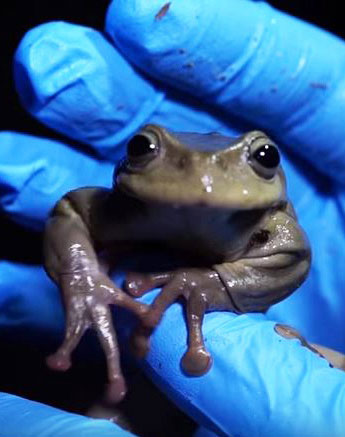 Global amphibian declines can be attributed to a growing number of additive stressors including habitat loss, pollution, and commercial over-collection, but the disease chytridiomycosis is now the single most immediate threat to amphibians. It is estimated that chytridiomycosis has already caused significant population decline in approximately 200 amphibian species around the world and that number continues to grow. Chytridiomycosis has already decimated several native amphibian species in the United States, including California's yellow-legged frogs (Rana muscosa and Rana sierrae) and the Wyoming toad (Bufo baxteri). This disease also led to the extinction of the Northern and Southern gastric-brooding frogs (Rheobatrachus vitellinus and Rheobatrachus silus, respectively) of Australia and the Golden toad (Incilius periglenes) of Costa Rica. As of 2013, 42% of 1,240 amphibian species tested globally were found to be susceptible to infection, suggesting that thousands of species are vulnerable to this disease event. After nearly 20 years of research, there exists no clear example of a successful preemptive effort to prevent the introduction of Bd into a naïve amphibian population, and both Bd and Bsal are still spreading between countries and across oceans. The most effective long-term solution to protect amphibians from extinction will be to stop the continued global spread of these pathogens while we seek opportunities to contain and eventually eliminate them.

The international wildlife trade is the primary source of this current global disease event. Millions of amphibians are traded globally without any required disease screening, in part due to the absence of rapid, cost-effective, and non-invasive tools to screen for the presence of these pathogens within commercial shipments. The majority of these amphibians are purchased as exotic pets, for human consumption (as frogs legs), and biomedical research subjects and act as vehicles that carry Bd/Bsal into and throughout the United States. In order to significantly reduce the introduction of these pathogens into the United States and mitigate the threat to native biodiversity, a pathogen-free health certification program could be implemented to allow only “clean” shipments where Bd/Bsal absence could be demonstrated. A key hurdle to the establishment of any such regulatory infrastructure is the long-time delay and high price of testing required to confirm the status of Bd/Bsal presence in each animal and shipment, especially considering that individual shipments may contain thousands of animals.

At present, non-invasive detection of Bd/Bsal requires a skin swab sample or water filter sample to be collected and submitted to a laboratory for molecular analysis where the presence of pathogen DNA can be confirmed via PCR analysis. Each sample can cost approximately $20-$40 to have processed, and dozens, if not hundreds, of samples may need to be collected from a particular shipment of live amphibians to accurately confirm whether these pathogens are present. In addition to the high cost, this is a time-sensitive issue: these animals must be released to the importers as quickly as possible following their arrival in order to protect their health (in a matter of a couple hours, and often less). Whereas the time required to submit DNA samples to a laboratory and receive results is often days, if not weeks. Therefore, it is not currently possible to identify pathogen presence before a shipment leaves the airport and enters United States commerce.

As globalization continues to connect animals and pathogens from different parts of the world, new diseases will continue to emerge from the international wildlife trade. In order to combat Bd/Bsal and respond more quickly and effectively to future wildlife pandemics, it is imperative to create new diagnostic tools that can rapidly detect the presence of target pathogens at low cost and through non-invasive methods. Ideally, these tools will be developed to target Bd/Bsal, but will be adaptable to target any number of emerging pathogens that may threaten biodiversity in the future. The advent of such tools will allow for rapid screening and confirmation immediately upon import and/or prior to export, a resource necessary to develop the spine of a health monitoring program upon which to build a system of “clean” trade and reduce the threat of these pathogens to amphibians in the US and globally.

Ready to help us detect and address chytrid? Think you’ve got a good idea or potential solution that might help tackle this challenge? Then, let’s get to work!

Please share and submit your idea or project here. Challenge Leaders are eager to work with project instigators and develop and apply promising solution ideas. The community will help shape and improve your idea, and the Digital Makerspace can offer tools and exposure to help you get traction.

Your project idea may be eligible for the Con X Tech Prize, a prototyping grant competition run by Conservation X Labs. Check to see if there is an active competition and get started on building your idea! 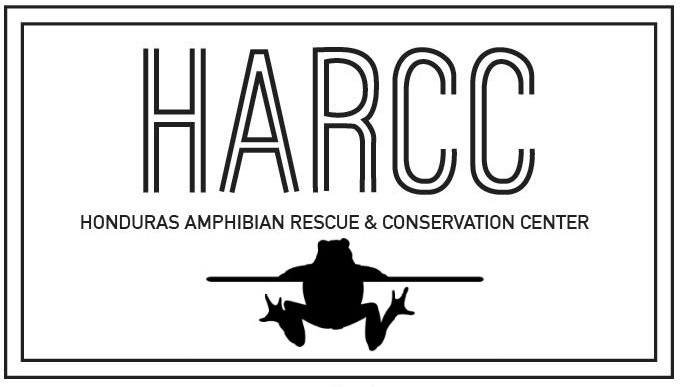 Submit a Project to the Find the Killer Frog Fungus