Follow
Nutrient runoff and waste from agriculture and sewage has contributed to widespread instances of dead zones that kill marine life, reduce their reproductive potential, and force species to move to new habitats.
Open for Entries

Nutrient pollution in coastal areas, which primarily results from agricultural fertilizer runoff and sewage, has led to a rapid increase in hypoxic zones in the ocean. In the last half a century, the number of dead zones in the world’s oceans has increased over ten-fold. The paucity of oxygen in these areas results in aerobic marine life dying or moving away. Habitats once rich in life become dead zones, the equivalent of deserts in the ocean. This problem is accentuated by warming and worsened by acidification. The triple threat of deoxygenation, warming, and acidification has been associated with past major extinctions.

End deoxygenation by disrupting and redesigning systems of agriculture and wastewater management on land:

Nutrient runoff and waste from agriculture and sewage has contributed to widespread instances of dead zones - regions of widespread hypoxia (areas without oxygen). This hypoxia either kills marine life, reduces their reproductive potential, or forces species to move to new habitats. Dead zones commonly occur near inhabited coastlines, where marine biodiversity is often highest, and where communities and ecosystems depend upon healthy habitats. The extent of the losses from such dead zones can be economically and biologically significant. In the Black Sea in the 1970s and 1980s, an estimated 60 million tons of bottom-living aquatic life perished from hypoxia, resulting in dramatic impacts on fisheries and biodiversity.

During the 20th century, the rapid industrialization of agriculture, coupled with human population growth and urbanization, has led to a massive increase in number and size of dead zones globally. In 1960, there were 10 documented dead zones, but by 2007 scientists had identified 169. Currently, scientists estimate there may be over 1,000 dead zones around the world, including many that are undocumented. Concentrated in areas with high human activity, these dead zones are a result of disrupting natural biogeochemical cycles.

The mechanism by which these dead zones occur—rapid eutrophication— also offers opportunities for intervention. The excessive supply of nutrients, mainly phosphates and nitrogen, spark the growth of phytoplankton and lead to algal blooms. The water becomes more opaque as phytoplankton populations boom, and the shade they cast deprives the plants living below them of sunlight. Sea grasses in shallow bays also become covered with small epiphytic algae and can ultimately be smothered and die. Algae can also envelop and kill off coral reefs. The critical shift happens when the massive blooms of phytoplankton and other organisms die. As organic matter accumulates, bacteria digest the organic matter and consume the oxygen present in the water during the decomposition process, creating hypoxic conditions.

Approaches that unify land-based and marine farming practices in a closed-loop system have been designed to capture nutrient runoff for use in growing marine macro-algae that can be used in local agriculture. 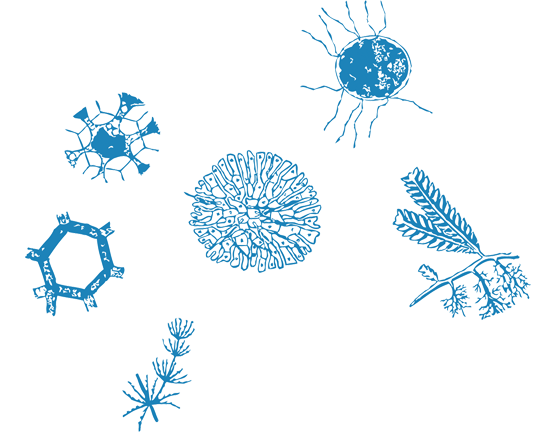 This hypoxia is caused primarily by the intensive use of agricultural fertilizers, particularly in the developed world. Globally, farmers spend $60 billion annually for 150 million tons of fertilizer to nourish their fields. Much of this may be wasted. Farmers often apply excess fertilizers or have poor systems to keep fertilizers in the soil. Rain and irrigation then washes excess fertilizer into inland waterways, and ultimately to the ocean. Currently, less than half of the fixed nitrogen generated by farming practices actually ends up in harvested crops, and less than half of the nitrogen in those crops actually ends up in the foods that humans consume. Much of the remainder ends up fertilizing phytoplankton and algae in the ocean.

Additional drivers of greater nutrient emissions into watersheds include fossil-fuel use (which releases nitrogen into the atmosphere), effluent from the mass breeding of food animals (especially pigs and chickens), and sewage systems that empty directly into the sea. Untreated sewage causes the majority of dead zones in Africa, Asia, and South America. The presence of large-scale aquaculture in Southeast Asia may also contribute to hypoxia.

SOpHIE
Market Shaping Phase
We are AHAB, on the hunt for disruptive algae using satellite imagery.