Not for profit, Hybrid IP model, Solution Refining Phase, Eager to add new members
Other Other
Follow Request to Join
Digitally Preserving The Heritage of Life on Earth

We aim to create 3D digital content that will be widely used in K-12 schools, as well as in Universities, and by everyday laypeople. The basic conservation problem that we are aiming to solve is how people understand and perceive biodiversity. Storytelling is one of the most powerful agents of change for conservation. Iconic photographs by National Geographic and individual storytellers has brought the plight of endangered animals to peoples homes everywhere. However, the 21st century presents new opportunities for storytelling that have not been fully exploited. The rise of Virtual and Augmented Reality (VR and AR) present new growth opportunities for visualizing biodiversity, and for educating people who increasingly rely on smartphones and computer screens. By creating 3D models of endangered animals, we allow people to access these animals, such as sea turtles, sharks, snakes, and more, and use them in such technologies. Also, by creating new VR technology platforms using this content, we will create new ways of learning. In this way, our content opens the doors to thousands, and ultimately millions of story tellers who will then drive the conversation themselves. In this way, we aim to leverage our content to enable scientists, laypeople, and educators all over the world to re-envision their relationships with nature.

Our project aims to digitally preserve the heritage of life on earth by creating accurate, high-resolution 3D models of life for open-access conservation, education, and science. By creating these 3D models, which are downloaded and used all over the world for countless uses, our goal is to showcase the beauty and fragility of some of the most threatened animals on earth using 21st century technologies. For example, one of our top projects is creating 3D models of all 7 sea turtle species. Sea turtles are among the most threatened and iconic groups on earth. By creating high-quality 3D models (for examples, see below) of these animals, we provide content for storytellers, educators, and scientists, each of whom has their own mission towards conservation. For example, educators can use them to demonstrate to an audience the taxonomy of sea turtles, and artists can create virtual encounters with these animals. Also, we aim to create new VR platforms for providing immersive educational experiences. We create these 3D models using the Beastcam camera technology, and working with 3D artists and organizations (e.g., New England Aquarium, San Diego Zoo). Our long term goal is to create a larger 3D collection of endangered animals (elephants, rhinos), which will allow more opportunities for story-telling. 3D blacktip shark: https://skfb.ly/6xPP9 3D timber rattlesnake: https://skfb.ly/6sLPO 3D Loggerhead sea turtle https://skfb.ly/6xPvE 3D Green sea turtle https://skfb.ly/6xPvF) 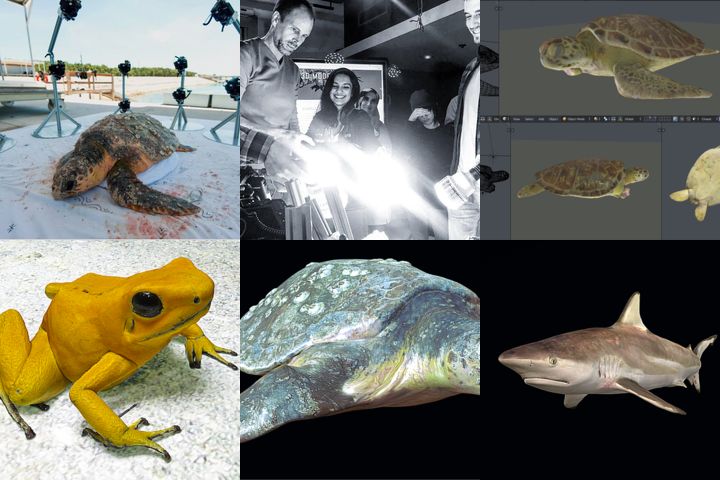 -Use and development of 3D models for animation, education, and gaming will grow

-VR and AR technology will mature, and become less expensive

-Computing hardware will continue to be become smaller and faster

-Growth in VR and AR will continue

Our primary constraint is funding. We have incredible talent in terms of 3D artists, photographers, and engineers. However, everyone up to this point has largely been volunteering their time as they believe in the work that we do. However, this is unlikely to persist and without funds to purchase new gear, to hire artists, and to travel to conduct our work, it is likely that progress will stall. The need to document these animals is urgent, as many animals are currently going extinct, and their fate remains in the balance. For example, the long-term fate of tigers, polar bears, and other megafauna, not to mention countless lesser-known species, is unclear. Our team has worked extremely hard to develop the unique skill of modelling live animals, and to foster the partnerships with organizations (e.g., zoos) which allow this work to proceed. However, without sufficient funds, the future for our longer term goals remains uncertain.

Our primary goals are (a) 3D models of live animals, especially rare and iconic megafauna, that can be used and downloaded by anyone for non-profit use, and (2) creating VR platforms (Biology Lab of the Future, and Immersive animal encounters) that showcase these models for education. We also aim to expand the reach of our models to a wider audience, and ultimately become the worldwide leaders for the creation of 3D animals.

As noted above, to scan large megafauna in collaboration with zoos and other organizations, we require 3D artists that will render the animals, engineers that will design the solutions to scan the animals, and photographers and videographers that will help us tell the story of the work. In addition, we require travel money for transporting gear and personnel to different locations to execute the work.

University of Massachusetts at Amherst
or
DISCUSSIONS & TASKS
IN AREA / PROJECT