Modern industrial agriculture and unmitigated human expansion is causing one of the largest scale extinction events in our history, and it is going completely unnoticed. Biodiversity of microscopic soil organisms is an absolutely essential resource, critical for sustaining all macroscopic terrestrial life on this planet, including humans. Sustainable organic agriculture relies on the health and balance of microscopic soil ecosystems. Soil organisms regulate carbon flux and the water cycle. The stability of large ecosystems, such as forests, can be traced back to the complex symbiotic relationships of the millions of microscopic organisms found in soil. And yet, here we are, replacing soil with concrete, poisoning our most critical lifeline with pesticides, and furthering our dependence on fossil fuels to sustain our agricultural practices. We understand more about the surface of other planets than we do the microscopic life in our own soils. It is estimated that we have identified only 1% of soil microorganisms. It is no wonder we know so little about this unimaginable complexity though, due to the sheer magnitude of biodiversity. One scientist could spend an entire lifetime understanding all that is going on in just one sample of soil, let alone soils from regions all over the planet. Almost poetically, the very biodiversity that we are destroying, may be an unexplored technological frontier containing the solutions required prevent and reverse the ongoing soil catastrophe.

Use the power of citizen science and crowdsourcing to discover and classify new microscopic species in soils all around the world. Anybody with a smartphone can assist in the data collection of soil microorganisms in their local region, and have fun doing it. At the core is a clip-on device that attaches to your smartphone camera, and turns it into a tool for scientific discovery. This clip on device contains a microscope (smart phone clip-on microscopes already developed and on the market) , a soil collection/containment cartridge that sits in front of the microscope, and a mobile app that interfaces between the user and the physical device. Similar to Geocaching, locations with soil that has yet to be analyzed will have a marker on the map. Once a soil sample has been collected in the special cartridge and inserted into the smartphone microscope device, the software will detect when a microorganism moves in front of the camera, begins recording, and uploads the video to the cloud, to then be interpreted by machine vision algorithms that identify morphological features and can classify organisms. Video data of interactions between species would also be captured. These large data sets will help monitor the soil biodiversity conditions of soils all over the globe. 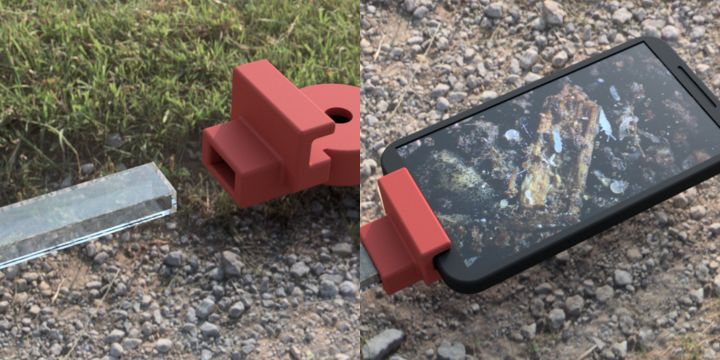 This problem has yet to be solved.

There are no other projects that are implementing this solution.

Ordinary citizens will be incentivized to assist in this project.

Machine vision is advanced enough (or will be in the near future) to classify organisms based on visual morphology.

Sufficient data can be collected from small samples of soil.

Creating a cheap and accessible method for monitoring the vast quantities of unique soils all over the planet. Incentivize ordinary citizens to partake in soil data collection by making it a fun experience.