The amount of plastic in rivers is poorly quantified. There is no warning of dense patches of plastic coming the river which could be efficiently collected

Plank of cameras – a plank with mobile phone cameras attached to it. The planks are attached to the underside of bridges of the rivers in the big cities of Asia to monitor plastic. The cameras generate high resolution pictures of the surface of the river by combining the numerous overlapping small images with an algorithm. Images are uploaded to the cloud every second or so. Within the cloud, an AI is trained to recognise plastic, and calculate how much plastic is flowing down the river. This will provide more detailed information on how much plastic is flowing down the river. This will improve municipal or charity management In addition, spurges of plastic can be seen coming down the river. When surges are known, fishing boats can go out into the bay to collect the plastic while it is still close to shore. Plank of cameras – big data for improved plastic control. 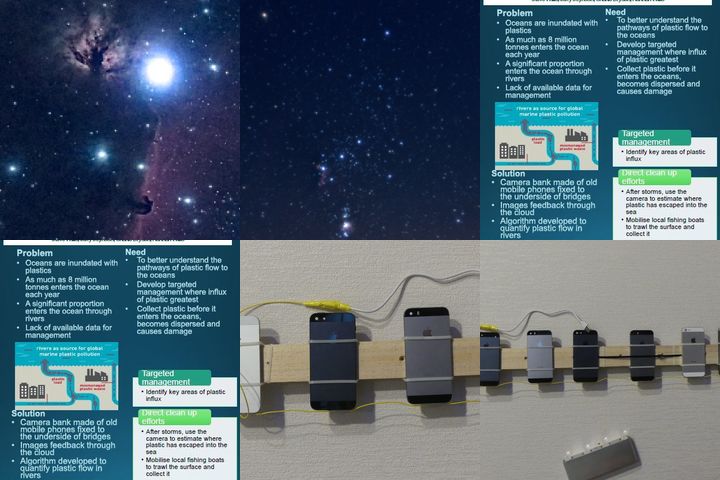 Similar software could be used to get high resolution pictures of the river from the camera plank. A processing heavy system for getting betting pictures out of low cost cameras

Mobile phone pictures can be combined to create high resolution pictures. Demonstrated by this picture of Orions belt and the horse head nebula. From BBC sky at night programme in 2016.

Big data for plastic monitoring on the rivers of Asia. Also provides an early warning system of surges of plastic coming down the river, so that boats can be deployed to collect it

Removal of large amounts of plastic from Asian rivers, thereby reducing the plastic pollution problem. In conjunction with the garbage star, this process will generate income for coastal fishing communities. This project could be deployed with the Plastic Bank system, providing cash for recovered plastic. It would also be possible to gasify collected plastic, making diesel fuel which can be used in two stroke local motor bikes.