This idea was generated in response to the Make For The Planet request for a technique for faster coral out planting The request was to speed up the out-planting process such that each coral plug could be installed in 30 seconds, rather than the current 3 to 5 minutes

A quick, cheap and easy coral restoration technique. The various outplanting activities are broken down into small steps like an assembly line. This minimises the amount of activity that the divers have to complete under water. The steps are: 1 In the morning, harvest the coral branches that are due to be planted out that day. 2 Bring them back to shore in a tray or bucket. 3 Attach the coral plugs to a pre-prepared stick which has a 'champagne cork' wire cage attached to one end. 4 The small wire baskets are tightened by pulling a pre-made loop with a wire-tie-tool. This firmly fixes the coral to the stick. 5 To prevent any small movements, the coral is fixed to the stick with epoxy or surgical super glue. 6 The completed coral sticks are put in a tray to be taken to the reef. Non-diving members of the team can do this part of the job. 7 At the reef, two divers work together. 8 The first diver drills holes in suitable locations on the reef, in a line. 9 The second diver follows closely behind. 10 Using a glue gun, the second diver puts a blob of epoxy or surgical super glue into the hole, followed by a coral stick. 11 The stickiness of the glue or epoxy stops the Coral Stick from floating away while the glue sets. 12 Using this technique, it should be possible to plant two coral sticks every minute or so, which is much better than the current 3-5 minutes per coral plug. 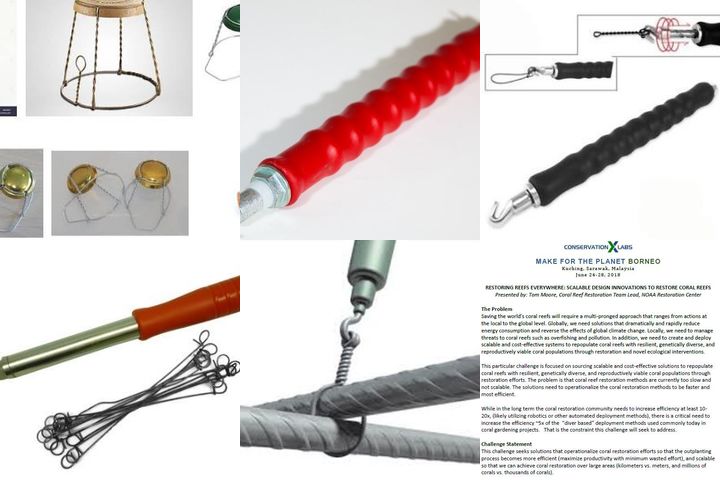 The out-planting task can be broken into a series of smaller task that can be done before the diver enters the water, and that these can make the divers job much simpler

More effort can be done by non-diving members of the team and volunteers to make easy to handle coral sticks which just need a drill, some glue and placement into the hole

That divers work in pairs for safety, so two people will be in the water together anyway

More rapid out planting of coral frags into areas that need to be restored. Development of techniques that can be applied to the deployment of coral in other ways, such as the attachment of coral to large concrete blocks which are dropped into the sea as part of Ocean Orchards projects

A mixed team to work on a range of aspects. Followed by trials in the field. Ongoing review and optimisation of the process, possibly using time and motion type techniques.