Harmful algal blooms are disruptive to marine environments and humans due their detrimental effects on sea life and human health. Certain algal blooms release toxins such as domoic acid that affect commercially valuable shellfish. Other blooms starve areas of the ocean of oxygen, leading to mass die-offs of fish. These effects precipitate up the food chain , leading to negative impacts on marine mammals and humans. Thus, monitoring for harmful algal bloom events is important from environmental, health, and economic perspectives. | Some of these bloom events have a known cause, such as human inputs of fertilizer run-off, which lead to eutrophication. These are exemplified by recurring events near areas of large agricultural development, such as the Great Lakes. Other events such as the harmful blooms that occurred last year off the U.S. west coast, which led to multiple fisheries closures, are less certain in their timing and cause. However, there are indications that harmful algal blooms may become more frequent with a changing climate.

While careful monitoring of harmful algal events can greatly reduce the risks to human health, rare events in poorly monitored areas could pose significant risk due to a lag in detecting and reporting on these events. | Combining environmental satellite data and a database of historic toxic algal blooms, we intend to use machine learning to classify bloom events based on their likely origin and negative impacts on the environment. As the satellite data is updated we will produce daily-weekly assessments of potentially bloom-like conditions for tens of thousands of coastal sites worldwide, which will be made available to the public via a web/ mobile app. | Satellite derived measurements of physical parameters, such as temperature, and biological parameters, such as chlorophyll, will be combined with spatial information about human settlement and in-situ data as necessary in order to characterize some of the variables that may be indicative of bloom-like conditions. We will produce an ensemble of estimates, using an artificial neural network, in order to determine the uncertainty in our assessment. | For areas where there is a statistical level of confidence, we will provide to the public, via our web/ mobile app, indicators of a location being at low, intermediate, or high risk of particular types of bloom events via a simple green-blue-red "health" icon. 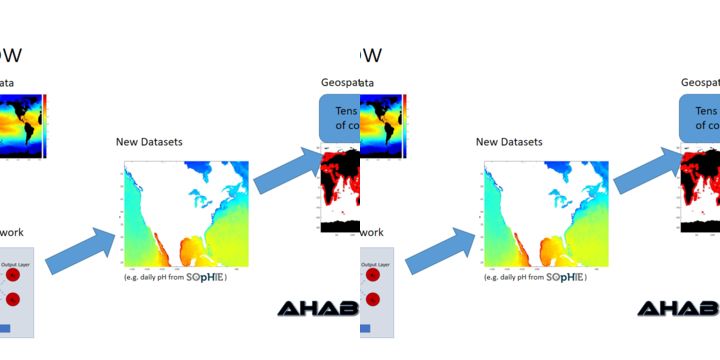 4. Model uncertainty is generally low enough to provide estimates via the "health" icon

Machine learning has experienced a renaissance with the increased availability of computer processing power, but its application to environmental problems is in its relative infancy. This has mainly been due to the lack of major economic incentive for private entities to develop applications within the space. But with climate change becoming a prominent issue, especially over the past decade, there is more opportunity for products that participate in the green economy.

1. Develop a platform with daily active users and a global user base. 2. Foster partnerships with agencies to apply and validate this project's results. 3. Create a central repository for ocean data that is flexible to new data sources, including user inputs.