The Eastern Plains Landscape (EPL) covers an area of over 12,000km2, encompassing seven connected Protected Areas (PAs), and forming the largest remaining dry forests in Southeast Asia. The landscape supports 34 globally endangered species including: Asian Elephant ; banteng; yellow-cheeked crested gibbon; Indochinese leopard and dholes; as well as more than 334 bird species. Furthermore, the Royal Government of Cambodia (RGC) has identified the EPL as the site to restore the functionally extinct tiger to Cambodia – which roamed here for millennia until the last sighting in 2007. Over the last five years, threats to this globally unique habitat and the wildlife populations have dramatically increased. The threats include intense and large-scale snaring, illegal logging, illegal trans-boundary trade, in-migration and encroachment. WWF Cambodia has been funding and training local law enforcement (Rangers) in two of the EPL protected areas (Srepok Wildlife Sanctuary -SWS and Phnom Prich Wildlife Sanctuary -PPWS), but Ranger activity is chronically uncoordinated, there is no mechanism for learning from patterns of recorded illegal activity, and new Rangers struggle get on board or understand the value of abstract tools such as computer maps and smartphone applications. However, Rangers have unbeatable local knowledge. Improving law enforcement in SWS has become a priority matter for WWF and for the RGC who endorsed a plan to reintroduce Tigers in SWS.

We propose to build a large, interactive, physical model of the SWS, with some key differences to a typical map representation, which make it actually useful for local Rangers and operations staff, namely: Excluding extraneous information (scale, political boundaries, abstract coloring, etc), Promoting local landmarks rather than names/coordinates as reference points, Promoting prominent terrain features rather than high-fidelity contour mapping, Preferring simple visual cues to complex layered interfaces or optional datasets, Allowing groups of people to physically interact with, and move around, the model. Crucially, information flowing from WWF's existing SMART Connect activity-tracking system will be pooled and displayed in real time, or in review, directly in the model, with a few simple hardware controls. It is expected that such a model would be beneficial for several groups: Rangers - giving them a fast overview of the current context, reviewing their activity, and training new Rangers. Operations team - giving them the ability to convey plans and strategies to Rangers, coordinate resources better. Donors and government stakeholders - giving them an immediate and intuitive understanding of the scale and challenges of the work of protecting the SWS, where their money is going, and what results have been achieved. Key technologies will be locally available: 3D printing and laser cutting, CAD, WS2812B LEDs, and the Particle IoT system. 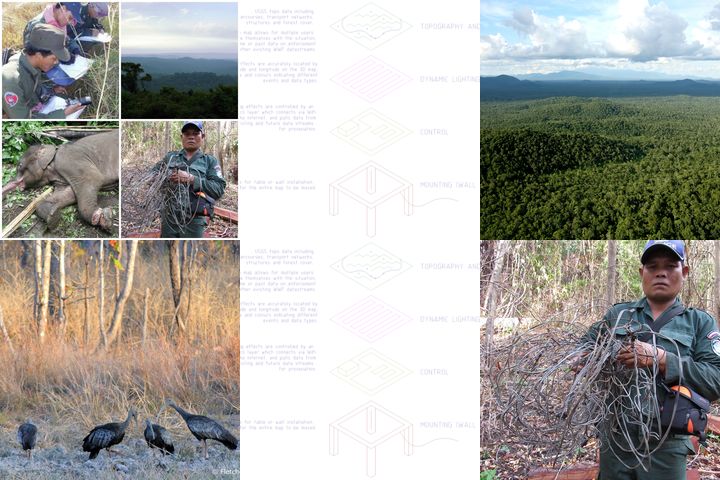 Rangers struggle to put their work in context, and see the benefits they bring to their communities.

Poor communications between managers, planners and Rangers hamper the effectiveness of the enforcement operation.

All stakeholders can embrace new technologies and make use of them provided the technology takes adequate account of the constraints and strengths of the users.

Combining training and operational and public relations tools in one is a cost-effective approach.

Small demonstration technologies on specific projects are rapidly adopted by other groups and in other problem contexts when they prove to be effective.

Enforcement operations need to be pro-active and strategic rather than reactive in order to be effective.

It is often assumed that more information leads to better strategy, and that abstract training/management tools are sufficient to instill confidence, motivate and inform key participants in complex multi-stakeholder activities, such as law-enforcement. Particularly in developing countries, these assumptions are not safe. The people doing the most difficult work in enforcement will often be less confident in reading maps, frustrated by inadequate communication with planners and managers, unable to see the broad benefits of their hard work, and overloaded by abstract information that they can't put in context. In rejecting these assumptions, we will find a balance between using new technology products and capitalizing on valuable local knowledge to help Rangers and Planners communicate more effectively with each other, articulating strategy, reviewing relevant information, and making plans that can be acted on.

Funding for initial prototype. Testing program design and evaluation. Further funding for a full-scale implementation to cover more regions of the EPL in Cambodia. Support to properly document the design process so that others can use our techniques to apply to their own regional context.

Bespokh and WWF Cambodia
or
DISCUSSIONS & TASKS
IN AREA / PROJECT