With global per capita fish consumption increasing steadily each year, fishing is crucial for food security and poverty alleviation around the world. However, more than 7.3 million tons of marine life is caught accidentally each year, including already-vulnerable species such as turtles, porpoises, and whales. As growing populations put more pressure on food demand, fishing efforts are predicted to grow substantially, further increasing rates of bycatch. Current efforts to reduce bycatch are often ineffective and have unforeseen, adverse effects. For example, pingers, which are acoustic deterrents that emit periodic sounds to alert nearby marine wildlife (excluding fish) of fishing nets, actually lure sea lions and seals to the nets, a phenomenon known as the “dinner bell” effect. Additionally, these pingers only emit a fixed set of frequency, without accounting for variation in animal response. Coupled with the predicted increases in fishing rates, these ineffective “one-size-fits-all” bycatch deterrents can be detrimental to marine biodiversity. Thus, new, innovative tools are needed to adequately prevent bycatch without decreasing fishing efficiency (the amount of target species that are caught).

We want to combine the power of sonar detection, artificial intelligence, and acoustic deterrents to significantly reduce the cetacean bycatch (whales, dolphins, and porpoises) from gillnets, which are often referred to as walls of death due to their high bycatch rates. Our prototype employs a multi-step process to increase the efficiency and adaptability of acoustic deterrents. First, sonar detection will be able to effectively monitor the types of marine life near gillnets. Once animals are detected and categorized through artificial intelligence, our acoustic deterrent will emit specific frequencies (if seals or sea lions are detected, no sounds will be emitted to reduce the “dinner-bell” effect). Furthermore, continuous monitoring through sonar will allow us to alter frequencies to ensure that cetaceans actually avoid the gillnet and to adjust for potential habituation. A lot of fishermen are hesitant to implement bycatch prevention devices as current deterrents are often unreliable and fishermen fear that they may not recoup their costs. By consistently decreasing bycatch rates, our dynamic prototype will save fishermen money, further incentivising them to install our deterrents. Furthermore, our prototype can be adapted to any gill net around the world. 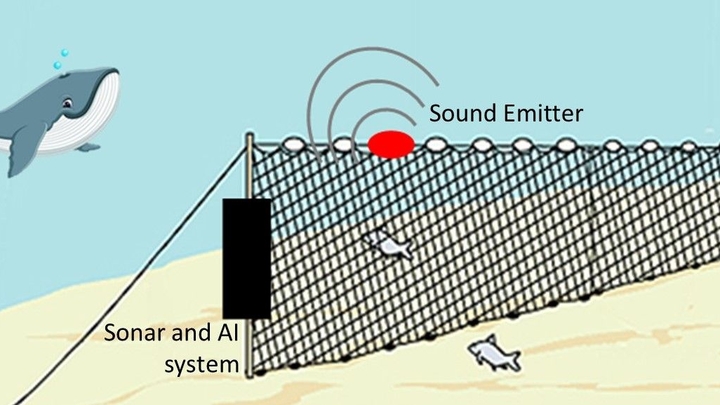 Our proposed prototype will have negligible effects on fishing efficiency.

Both industrial fisheries and local fishermen are actively seeking new methods to reduce bycatch and will allow us to test our prototype.

Implementation of our prototype will be more economically feasible for fisheries than damages and costs incurred through unwanted bycatch.

Development and utilization of our prototype will be accompanied by scientific monitoring, allowing us to improve our prototype through adaptive management if needed.

Our prototype will be economically viable for local fishermen through reduced production costs associated with large-scale implementation and external funding (if needed).

Overall, there is a lack of scientific research regarding the effectiveness of currently-implemented bycatch deterrents, as well as any potential impacts on fishing efficiency. Successful implementation of our prototype must thus include progresses in scientific knowledge regarding these deterrents. Additionally, many marine species lack adequate behavioral and ecological research, further adding to the uncertainties associated with the effectiveness of deterrents. Lastly, although some scientists have suggested to reduce fishing efforts to avoid bycatch, the overall significance of fishing in terms of food security and local economies makes this an unpractical and ineffective solution. Thus, a diverse group of stakeholders, including governments, NGOs, and fisheries, must come together to sustainably meet growing food demands.

Train a machine learning model on sonar detection and pinger response to vary pinger frequency emitted for each animal group to effectively deter cetaceans from gillnets. Develop hardware prototype and test across multiple gillnets by the end of 2018.

Although we have some engineering and AI expertise on our team, we would like to partner with professionals who are experienced with sonar detection, gillnet fisheries, and AI. Additionally, we would need partnerships with local and industrial fisheries that will allow us to test and monitor our prototypes. Lastly, we will need funding to develop our prototype.