The global fish stocks have been declining for decades. According to the Food and Agriculture Organization (FAO) fisheries data, the global marine fisheries catch peaked at 86 million tonnes in 1996 and has declined since. This is mainly due to the damage and destruction of marine ecosystems caused by the fishing industry. Trawling in coastal areas has damaged reefs as well as seagrass and soft-bottomed habitats. The destruction of these seafloor habitats is a significant factor in the decline of some fish stocks in heavily trawled areas. What can be done about it?? • Generate huge quantities of fish economically and profitably in new, specially built, habitat. How to do it? • Apply massive-scale engineering project thinking to build massive areas of new artificial reefs to form excellent fish habitats. • Make these new reefs compatible with the existing trawler fleets. Include sections of old oil platforms to establish the foundation of a large artificial reef array. The volume of the reef will be supplemented with specifically designed reef areas and thousands of fish aggregating devices (FADs). FADs are traditionally used to help catch fish, but in this case, they will be fixed in place and used to provide low cost and voluminous habitat for fish. These new artificial reefs will be away from the coast and will generate new populations of fish that can be caught by conventional trawler fleets.

OCEAN ORCHARDS The project objective is to demonstrate a new technique for rebuilding fish stocks and creating millions of tonnes of new fish. The project will install a 25 hectare Ocean Orchards demonstration site consisting of fixed fish aggregating devices (FADs), large concrete reef blocks and sections of an old oil platform. This will create a de-facto mini Marine Protect Area (MPA), with extra vertical height, to mimic the 20x higher productivity seen around oil platforms (ref: Claisse et al.) It is clear that fish love oil platforms, and the aim of this demonstration site is to prove that suitable habitat can be created using large numbers of fixed fish aggregating devices constructed from minimum cost material. Once demonstrated, the plan is to lay out thousands of square km to make millions of tonnes of new fish every year. Lanes will be left between Ocean Orchard squares to allow industrial scale fishing to continue. The trial will be closely monitored to establish how many fish are aggregated into the area, and how many new fish grow and live in the area. These observations will be made in a scientifically rigorous manner, and reported so that the data can be widely applied. Once proven, full sized Ocean Orchards will be monitored by: • The fish catch and productivity of the areas; • Data gathered from sonar on the fishing boats working in the areas; • Community impact can also be assessed as part of this work. 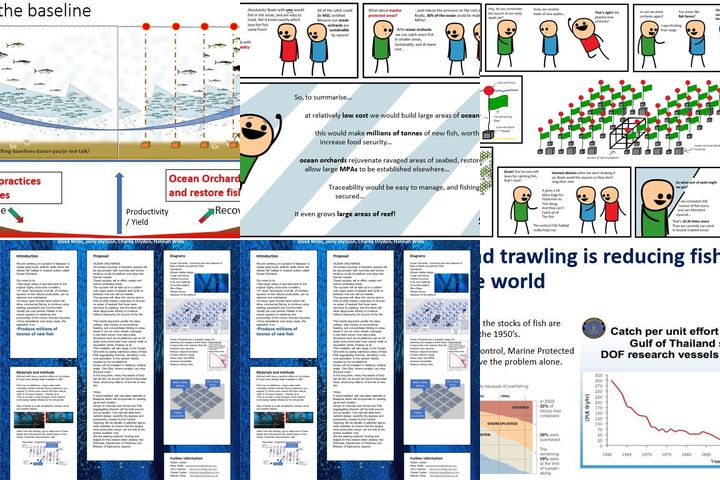 That a combination of FADs, sections of old platform and large concrete reef blocks will be an attractive habitat for fish;

That fishing communities will accept the developments and use them in a way that builds and maintains their productivity over may years;

That large areas of already trawled and denuded seabed will recover to its original productivity in a few years, and increase beyond that aided by the vertical height of the FADs;

That the Ocean Orchard areas serve as new fish producing areas, not just as aggregation zones;

That large areas of Ocean Orchard can be built rapidly at low cost;

That private investment will come into this market to build large areas of Ocean Orchard, and manage it to produce a maximised and optimised fish yield over many years;

Once demonstrated, it is expected that all ASEAN countries will adopt an Ocean Orchards approach to make millions of tonnes of new fish, each in their own coastal waters;

Data collection will create a Big Ocean IOT which will allow areas to be monitored and optimised by the equipment already carried by boats;

At a later stage, CO2 sequestration can be combined with increasing the yields of the Ocean Orchards by doing Ocean Nutrification upstream of the areas to provide low cost feed for more fish;

Prices of fish can be maintained and increased as more, better quality MSC registered fish is available for export.

Large numbers of small scale artificial reefs have already been built around the Coral Triangle in the ASEAN area. In Thailand alone some 2,000 km2 of simple artificial reefs have already been built. There are 181 artificial reefs in Malaysia. Fish Aggregating Devices (FADs) are known to attract fish very effectively. Similarly, the large vertical structures associated with oil platforms are very prolific fish habitat. These observations have not been brought together before to make a new type of habitat which is designed primarily to make huge numbers of new fish - on a big enough scale to rebuild the worlds fish stocks. This demonstration site will perform the trial and establish how extensive the Ocean Orchards would need to be to achieve the goal; Areas will be simultaneously open and closed - lanes will allow fishing to continue, and lanes will also mean that not all fish can be caught

The objective of this project is to demonstrate a new technique for rebuilding fish stocks and creating millions of tonnes of new fish.

The main priority is to raise sufficient funding for the construction of the demonstration site to be able to carry out the demonstration trial. Malaysian authorities see this as a very promising project and are keen to see the results of the trial. However, without proof of concept they are not in a position to fund it.