Unknown profit model, Unknown IP model, Market Shaping Phase, Open to new members
Other
Follow Request to Join
Using air pump to detect the existence of hole in the xylem that will be the means for the ROD fungus to get in the Ohi'a tree.

As the challenge conservation x states, two newly discovered invasive fungal pathogens are killing hundreds of thousands of ʻŌhiʻa trees (Metrosideros polymorpha) on Hawaii island. Hundreds of thousands of trees have been wiped out by the fungi, which chokes the water veins within the tree until the tree withers and dies. This result in low water in the body of Ohi'a tree. According to https://www.scientificamerican.com/article/how-do-large-trees-such-a/, both vessel and tracheid cells allow water and nutrients to move up the tree, whereas specialized ray cells pass water and food horizontally across the xylem. All xylem cells that carry water are dead, so they act as a pipe. Xylem tissue is found in all growth rings (wood) of the tree. That means the ROD fungus blocks this pipe until the tree dies. According to on task researchers the ROD fungus is believed to enter into the ohi'a tree via air. If that is the case, in order for the ROD fungus to enter into the Ohi'a tree, there must be a hole in the tree.

Using this project which is a pressure pump test we can get a prevention mechanism and also early warning mechanism of the ROD fungus. This test is applying pressurized air in the xylem pipe of the Ohi’a tree. A tree that has holes in the xylem will have low pressure because the air leaves through the hole. This test is done on the lower part of the tree and there will be a permanent hole which has a closing mechanism when the test is done. By applying a pressure on the lower hole, if air is passed all the way there must be a hole on the xylem that will lead for the ROD fungus to enter and block the water transportation mechanism. If there is pressure build up reading on the pressure gauge, there is no hole for the ROD fungus to enter. We can treat the holes in the tree if we find the trees which have holes that will be the gateway for the ROD fungus and if already ROD is present on the tree, we have our early warning mechanism. If the ROD fungus is present in the tree and has already blocked the xylem pipe, the air pressure that is generated by the testing device will force the ROD fungus to open up and assist the Ohi’a tree transport water. This project is critical because it is the gateway for prevention mechanism which is the best medicine and life span extending mechanism which will buy the time to rescue the infected tree. By mere chance if the air bubbles are found to harm the xylem water transport, that leads to the second approach which is using water instead of air. 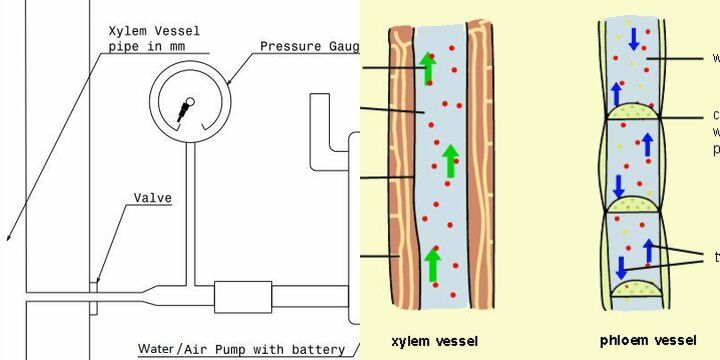 I am assuming that the Hawaiian peoples will be okay with being there is a permanent hole in the tree that will be closed when test is done.

Detection of the ROD involves sample collection over challenging and rugged terrain and then lab analysis. This takes too much time and effort and then after the analysis, the ROD might not be found. This project solves these problems because it tells us from which tree to take samples, which tree needs supervision and possible diagnosis of the tree before the lab report. Meaning, a tree which has holes in it has a higher possibility of being exposed to the ROD than a tree that is not wounded. This indication can speed up the detection of the ROD, add more information to the lab analysis which increases the diagnosis efficiency. The total average cost per tree is 57USD. If we test 100 trees to collect samples from all the 100 trees and test it in the lab, the total average cost per 100 trees becomes 5,700USD. Keep in mind that the lab test may show that 1 tree have ROD if not any. This project tells us from which tree to take samples saving about 5,640.00 USD at best in this scenario.

This solution is very tangible and realistic because it connects two known and proved science facts together in a very simple way. According to references like I mentioned above, there is a pipe structure that transport water and minerals up in trees called xylem. This is where the ROD fungus blocks the water transport mechanism until the tree withers and dies. It is a known fact that air pressure test is one of the methods to test if there is a hole in pipes. So, combining those will create a new method to prevent the ROD from fungus enters into the tree. The solution does not have any negative impact on the tree. The solution can be used at any time the client wishes to use or test because there are many options for pressure testing devices on the market. All required is making a hole in the lower part of the Ohi’a tree carefully and the test is in a wounded and healthy tree. If the pressure is found to be variable, we have our successful prototype.

ROD Pressure Sensing Save the Ohia

ROD Pressure Sensing Save the Ohia