Next Gen Payments For Ecosystem Services

In September 2018, an eclectic group came together in the Tsiseb Conservancy area of Namibia.

The room was a spectrum of farmers, safari guides, government officials, and employees from NACSO (a Namibian association of NGOs and the University of Namibia providing services to rural communities), and the World Wildlife Fund (WWF). The goal of the meeting: provide compensation to local farmers for the 35 goats, 3 cows, and 5 donkeys taken by predators in the conservancy area over the last year.

Preventing extinction for elephants, rhinos, and lions is imperative, but the local communities are the ones who pay the price of living alongside these charismatic megafauna - a cost paid in fences mended, crops damaged, cattle killed, and sometimes, human lives lost. 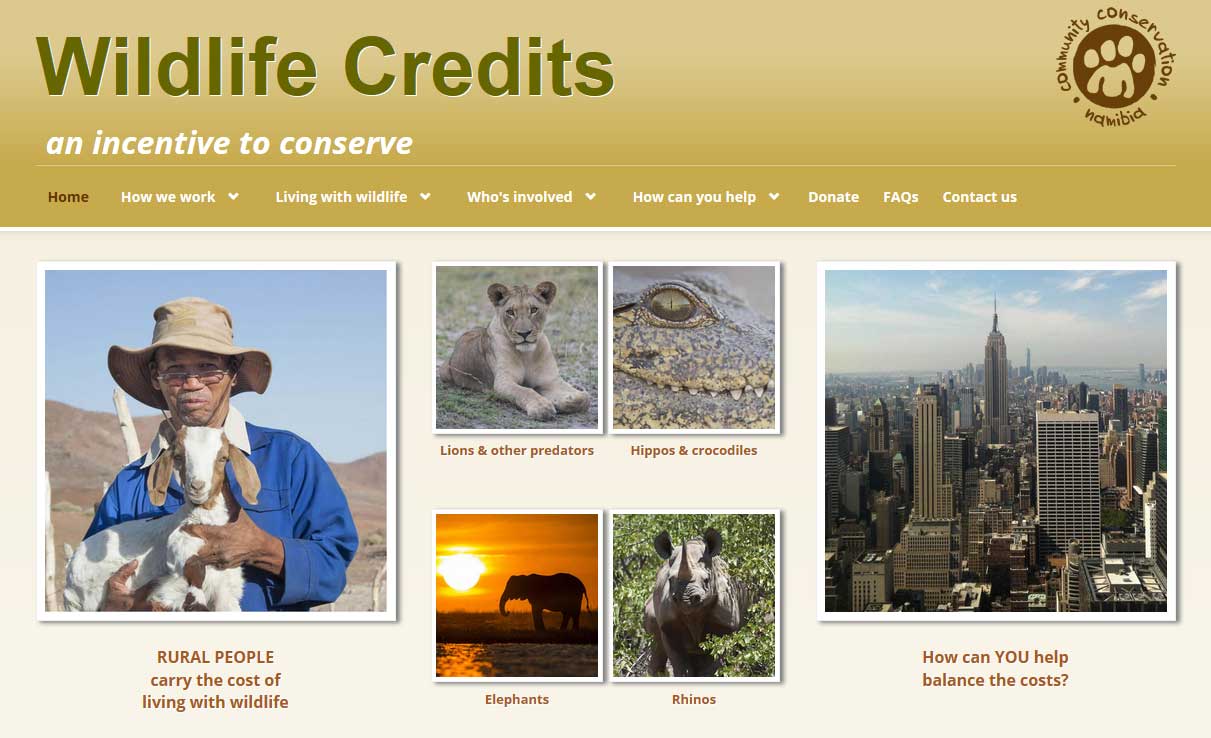 NACSO and WWF’s pilot program, Wildlife Credits, aims to address these losses. Wildlife Credits is a collaboration between government, global NGOs, funders, and local ecotourism businesses to offset the costs of animal conservation that local communities bear. By raising funds from across the world, they can put money directly into the hands of those who take any losses from conservation success - such as the farmers in the Tsiseb Conservancy.

Initiatives like this are called “Payment for Ecosystem Services,” or PES schemes. PES can be built around environmental stewardship in areas such as forest conservation, wetland mitigation, water quality, and more. They’re meant to compensate communities for positive outcomes for wildlife and ecosystems, and/or offset the costs borne by those on the front line.

But any solution comes with a subset of new challenges. PES schemes wrestle with transparency, transaction costs, and calculating and confirming conservation success.

Take, for example, a wildlife corridor set up by the Wildlife Credits initiative in the Dzoti Conservancy in Namibia. A wildlife corridor is a stretch of forest connecting two larger habitats, a “natural bridge” for animals to safely cross human use areas. The community has agreed to let the corridor remain in place in exchange for community payments. But determining that the corridor has remained intact takes time, and once the payment is sent, it moves through many hands before reaching the local community. This all takes time and money, and results in a complex system that can seem opaque from the outside.

In 2019, two Oxford University graduate students focusing on conservation and emerging technology joined forces to better understand the core challenges within PES and explore how new technology might alleviate some friction.

The students, Daniel Oberhauser and Charlie Chesney, came up with an idea combining blockchain technology with recent advances in satellite imagery. Blockchain, the backbone of cryptocurrencies, is a decentralized transaction database that is immutable and entirely transparent. Oberhauser and Chesney were intrigued by a lesser-known feature of the blockchain called “smart contracts.” Smart contracts use “if this, then that” logic to trigger an event (such as a payment to landowners) when certain criteria are met.

Applying in the 2019 round of the Con X Tech Prize, the two proposed an app to increase the efficiency of PES. Using Google Earth Engine, which allows access to weekly updated imagery of the Sentinel satellites with 10-meter resolution, the app would automatically measure the wildlife corridor at regular intervals. If the forested area had stayed within the agreed-upon limits, the blockchain smart contract would trigger a payment to the local community. Such a software could radically improve the speed, traceability, cost efficiency, and transparency of PES schemes.

That is, if it could be built. While the two suspected that the blockchain and satellite technologies could be integrated, they weren’t 100% certain. But this is the process of innovation: explore, discover, iterate. "Once we submitted the application to the Con X Tech Prize competition, I spent a lot of time figuring out details over the next few weeks,” says Oberhauser. “By the time that I got the good news that we were going to be CXTP Finalists, I knew it would work.”

And their work paid off. The project, Blockchain Ecosystem Payments, took home the $20,000 Grand Prize for creating a fully functional web app, proving their concept.

Oberhauser and Chesney have big ideas for the future of the project. “With the additional funding, now we can see how we take it further to really have an impact,” Oberhauser says. The app is currently being assessed by Wildlife Credits to see how it might be implemented on the ground in Namibia. The team aims to connect with professional software developers to continue work, and allow for both mobile and non-mobile payment platforms with the app in order to expand access to payments. 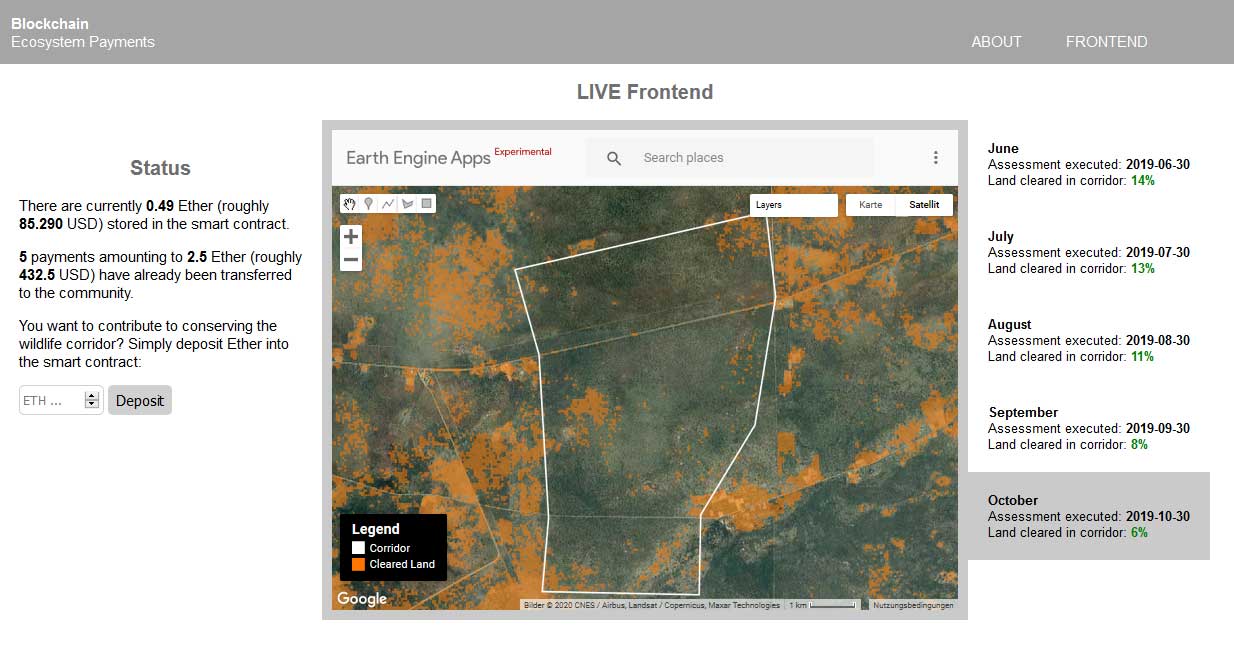 But, at the end of the day, technology won’t have all the answers - understanding and designing for human behavior is critical. “We know a lot about ecology; the problem is how do we get our people, our societies, to change – a step change on a different scale,” says Oberhauser. “If we don’t reduce land use change or deforestation, it won’t matter how a lion behaves, because we won’t have lions left to study.”

How might we create tools and products that shift human behavior so that it reduces the impact on our natural systems, and contributes to ending the 6th mass extinction? This question is at the heart of the 2020 round of the Con X Tech Prize. This year, the submission theme is Behavior Change. This competition awards $70,000 across 20 Finalists with a bold idea for conservation. The Finalists go through a 12-week prototyping period to create a working model of their idea, and one Grand Prize winner receives $20,000 to take their transformative technology to the next level. Applications are currently open for this Prize - your idea could be one of this year’s Finalists. If you’re not sure where to start, sign up for our half-day Ideathon on April 25, where experts will help you work through the process of innovation to create an idea ready for submission to CXTP.

The deadline for the Con X Tech Prize is May 4, and there’s no limit to how many ideas you can submit. Oberhauser’s advice? “Don’t give up if you think you have a good idea. We applied to the Con X Tech Prize in 2018 and weren’t picked as a Finalist. We refined it, tried to make it better and more appealing, and it worked out in 2019!”

Patrick Neligan has researched for and contributed to stories around conservation, public health, renewable energy, and international relations in publications around the U.S. He lives in Washington, DC.
Tom Quigley is a digital strategist, conservationist, and occasional writer of words.