DNA: The Only Way to Know What Kind of Fish You’re Really Eating

As a marine biologist and geneticist, he researches commercial fisheries analyses, and studies the population genetics of fish. “I pride myself on my fish identification,” said Baisch, who works for Conservation X Labs and the University of Washington. Yet despite years of experience studying fish species on the molecular level, Baisch was stumped when a U.S. Fish and Wildlife inspector put two cans of caviar in front of him: one filled with paddlefish caviar, the other with illegal sturgeon caviar. “I could not differentiate them—and I'm a fish biologist. How are we supposed to know this?”

In-hand DNA detection for fish/wildlife sample identification by a tricorder
15 Members
Eager to add new members
Immediate Needs:
Over the next three months we would love to include more individuals with experience in electrical engineering, genetic analysis, industrial design, and branding.
Follow Request to Join

Writ large, the question of seafood fraud—of one species being sold under the name of another—threatens the credibility of the global seafood trade, which is the world’s largest food commodity market. According to a review study published by Oceana last September, “25,000 samples have been analyzed worldwide, and close to 1 in 5 have not been correctly labeled,” said Kimberly Warner, a senior scientist at Oceana. “The scale is pretty astounding.” Swaps are made for mundane reasons like price and availability, but there are also instances of endangered species being sold as more plentiful types of fish, and fish being sold under the wrong name coming from illegal, unreported, and unregulated fishing vessels.

In order to combat seafood fraud, Warner said, “you need a quick way to assess if what it is is what it says on the label”—an assessment tool needed by fish and game inspectors, customs officials, and other enforcement agents in particular. And that’s just what Baisch is working on: a hand-held instrument that can identify fish—and other products—in the field in less than an hour.

The device works by comparing the extracted DNA of a small sample of fish, wood, or other tissue against a DNA barcode library. Geneticists have found that in mitochondria, there’s a 1000 base pair-long region of the DNA code that is unique to each species—and if you can read it quickly, you can tell on the spot if caviar is from a sturgeon or paddlefish, or if a piece of timber is white oak or an endangered Mongolian oak. The test wouldn’t replace the kinds of visual inspections and other processes currently used by enforcement agents, but would rather provide scientific support to their expertise and give them probable cause to temporarily seize suspicious shipments and later perform additional, robust verification tests in a certified lab.

To scan the DNA barcode in the field, a small tissue sample is first ground up with water and a special detergent, allowing for both the mechanical and chemical breakdown of the cells, putting the mitochondrial DNA into solution. A few microliters of the resulting slurry is placed onto a disposable cartridge and is inserted into the scanner and closed shut, “just like an original Nintendo,” as Baisch said.

Baisch and his team are using microfluidics to explore ways to speed up the DNA purification and amplification process, which allows the samples to be read quickly outside a lab. The amplified DNA will be compared to pre-programmed primers for specific species to see if there is a match, and the user will be able to read the results: A green light turns on if they match, a red light if they don’t.

The simple display came courtesy of end-user feedback, which is tantamount to the scanners design. “The enforcement agents gave us some really great feedback: we don't want screens, we want a red light, or a green light,” Baisch said, so he paired back his idea for a more complex, touch-screen display.

The goal is for the whole process—from cutting a sample to getting a result—to take less than an hour.

Conservation X Labs received funding to develop the DNA Barcode Scanner from Schmidt Marine Technology Partners and the National Fish and Wildlife Foundation. In 2015, the Justice Department reached a settlement with Lumber Liquidators following an undercover investigation into the company’s timber supply, which included Mongolian oak that was illegally logged in Eastern Russia—snow leopard habitat. The settlement required that part of Lumber Liquidators’ $13 million payout be put toward the development of a device that could identify species in the field. Conservation X Labs, an organization dedicated to the democratization of science and technology and the application of these tools to improve conservation around the globe, is leading the development of this device using scientific collaboration and open innovation.

But seafood and wood are only the beginning.

“DNA is DNA is DNA,” as Baisch said. It doesn’t matter where it comes from. “We can really take this platform and go anywhere with it—with the same constraints in mind,” he said: A low-cost, modular, open-source, hand-held scanner that someone without a background in science can use in the field. And by putting all of the DNA primers and other data on the Conservation X Digital Makerspace, there will be ample opportunity to get feedback and criticism alike on both the prototype and the science that powers it.

Conservation agents might use the barcode scanner and say, through the platform, "it worked, but it turned off, or it got wet, or this component breaks all of the time, or can this thing be bigger, or we need more power, or different things like that.” 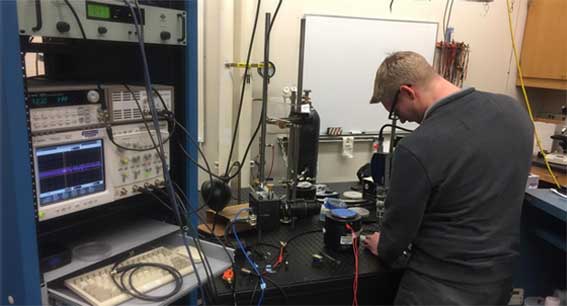 Hal Holmes in the Böhringer Lab at the University of Washington

Hal Holmes, a University of Washington Bioengineering PhD student in the Böhringer Lab and the engineer on the project, sees a lot of promise for expanding the scanner’s functionality and capability with the help of the Digital Makerspace. “The red light, green light device will be much easier than a device that gives a lot more information,” he said. “So we can reach that goal first, develop from that success, and we keep moving on and keep improving the platform.”

“It's been really cool,” Baisch said, “to bring in a lot of non-scientists and ask them, hey, what does your perfect tool look like?”