Shining a Spotlight on the Chytrid Fungus

An experimental optical physicist isn’t the first person you’d think to invite to a scientific gathering focused on chytrid, a fungal disease that affects toads and frogs that’s responsible for the extinction of several amphibian species. But in October 2014, when Conservation X Labs and the Smithsonian Institution organized a hack-a-thon dedicated to coming up with solutions for the fungus, they wanted to do more than get a bunch of herpetologists together in the same room; they needed new ideas, fresh perspectives. And that’s how Colin McCormick, a physicist who uses a lot of lasers, as he put it, ended up asking a room full of biologists what he thought was a very dumb question.

Shooting lasers at frogs to help them beat the chytrid fungus
3 Members
Eager to add new members
Immediate Needs:
Optics and circuit materials for the construction of the device. Low-cost microcontroller to be used as a driver for the circuit, and necessary programming. Advanced knowledge of circuitry, optics, and frog/chytrid biology. Ideas on how to maximize the FrogScope’s use and provide technical expertise. Troubleshooting and improving the laser signal.
Follow Request to Join

During a session at the hack-a-thon focused on chytrid detection, McCormick raised his hand and said, as he recalled, “I guess you already tried all the UV fluorescencetechniques and that didn't work? Sorry, stupid question—I'm just trying to catch up here.”

The technique McCormick was referring to is used in agriculture to detect fungal infections in wheat fields and vineyards: The plants are illuminated with an ultraviolet light, and if a fungal infection is present, they will glow “just like when you're in a club with a white shirt on and they have a black light,” explained McCormick, a technical advisor at Conservation X Labs. “Your shirt glows, or your gin and tonic glows that spooky, cool, ghostly color.”

But no one had tried using UV light to detect the disease in frogs, and it turns out that the chytrid fungus itself does fluoresce under UV light. (A few papers have been published on using UV light to diagnose other fungal infections in animals.) So McCormick and Brian Gratwicke, a biologist at the Smithsonian Institution, have been working to develop what they’re calling the FrogScope for Conservation X Labs, with funding from a Smithsonian grant.

The stakes are high for amphibians. “We think there’s about 100 species that have disappeared because of the chytrid fungus,” said Gratwicke, who heads up the amphibian conservation program at the Smithsonian Conservation Biology Institute. “It’s a very, very serious disease if you’re a frog, and it can lead to extinction.”

With a hand-held testing device, biologists doing field work would no longer have to swab frogs and send the sample back to the lab to test for the fungus—which can be an arduous, expensive process if you happen to be working, say, deep in the Amazon. Customs officials who scan imported amphibians, which can transmit chytrid to new populations of frogs and toads, would also benefit greatly from a device like FrogScope.

The problem is they haven’t been able to use a UV light to detect the disease on a frog’s skin—only when the fungus is isolated. “There’s no question that the fungus itself absolutely does fluoresce even when you hit it with pretty weak ultraviolet light,” McCormick said. 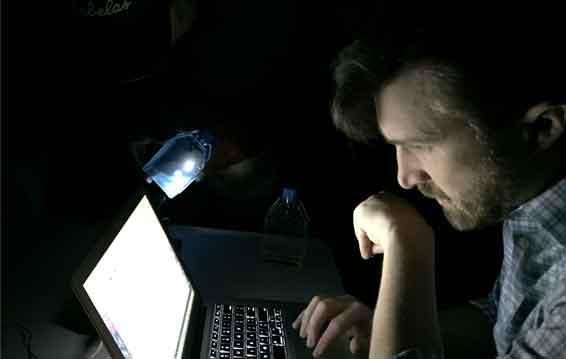 Colin McCormick Working With The Thingamabob

Although the FrogScope concept doesn’t yet work in practice, “I think it’s a cool idea, and I’m really glad that we tried it,” Gratwicke said. “Because there are a lot of very cool ideas that they never take A through Z.” At this point, he said, FrogScope has been taken from A through W, and Gratwicke thinks it’s not clear that the technique will work in the field.

But McCormick is hopeful that Conservations X Labs’ new Digital Makerspace platform will provide more opportunities to collaborate with people across disciplines, and perhaps find answers to the question that is currently vexing FrogScope. 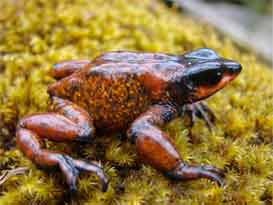 As he sees it, there are two possible approaches to making the device functional: Either by using a brighter UV light to create more fluorescence—which raises concerns about safety for a live frog—or by making the camera used to detect the fluorescence more sensitive. There’s also the question of functionality: Unlike the kind of highly controlled lab work McCormick is used to doing, where lasers are aligned to the millimeter, frogs have the tendency to hop around. In order for the FrogScope to be effective for field use, there needs to be an easy, safe way to keep the animals still while they are being tested.

After the project is live on Makerspace, and a new group of people with varied backgrounds in science and conservation get their eyes on it, McCormick can see solutions coming in one of two ways. “The best version would be if someone found the project and said, what a great project, you guys are really smart, here's the one thing that you're missing,” he said. “Of course, given the way the internet sometimes works, I could also imagine someone saying, you morons, you missed this totally obvious solution!”

If it’s a good idea, McCormick said that he’d happily take that.