Creating the Right Incentives to Save Wildlife

Every year, tourists spend $36 billion traveling to coastal areas around the world to dive on coral reefs. But how much of that cash makes it into the hands of surrounding coastal communities?

We made an app that will make "you get what you pay for" a reality for divers and marine wildlife tourists, whilst benefitting local communities everywhere in the world
4 Members
Open to new members
Immediate Needs:
- We need to identify a marketing and launch plan that will reach as many potential users as possible, this can include engaging relevant environmental NGOs to promote it in their project areas as well as directly reaching out to the tourism sector and marine park authorities in relevant forums.
Follow Request to Join

According to a 2017 report published in The Journal of Marine Policy, there are so-called million-dollar reefs in 70 countries and territories around the world, where underwater habitat produces $1 million in tourist dollars per square kilometer annually. But despite the economic value of reefs and the wildlife they support, those actual dollars tend to go largely to the tourism or service industries. Even locals working in those industries will only see a fraction of this money, as the bulk of it goes into government or private business owners’ wallets. While the community itself has lived by, drawn from, and cared for their ocean for many generations, the majority of individuals never see a dollar from the tourism industry profiting off those million-dollar reefs.

Conservationists are fond of saying that species like sharks are worth more alive than dead – and when you compare the burgeoning shark-tourism industry to the value of the shark fishery in many places, that notion is borne out. The idea behind a new app called Ocean Eye is to make that value more immediately apparent to the communities who live alongside destination reefs or other valuable marine life, by giving locals cash incentives based on the number and variety of species tourists encounter.

By tying marine biodiversity to a stream of money going directly into the pockets of the community, “...It gives the community an incentive to go after the bad actors,” said Sari Tolvanen, a marine conservationist and the project leader of the Ocean Eye team. If marine wildlife populations increase, payments go up. If numbers decline, so does this new revenue stream. When the whole community is benefiting from the money, Tolvanen said, it would result in people going to those who are involved in fishing illegally or collecting sea turtle eggs (for example) and asking “why are you still going and killing these animals?” 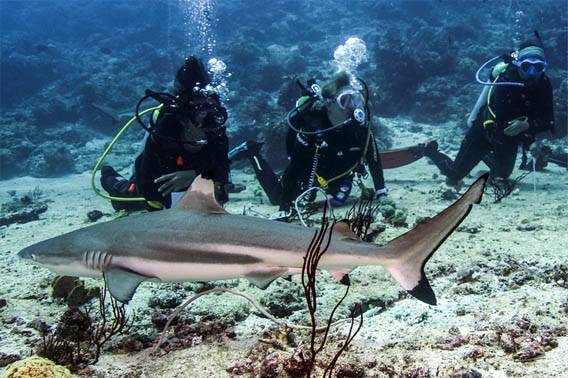 Originally conceived at the Make for the Planet competition run by Conservation X Labs in Malaysia last year, Ocean Eye entered the Con X Tech Prize prototyping competition - and won funding to prototype their app over the 12-week prototyping period. The app won’t require any NGO or large organization to deploy, but rather can be used by individual dive outfitters and marine tour companies. The pricing mechanism can be adjusted to suit both a particular group of tourists and the needs of the biodiversity in the location in which the tourism activity is taking place. As Tolvanen said, “you can survey your tourism target market on how much you pay for different animals, and then you calibrate the application based on what you have in the area and what species need protection.”

During a feasibility study, Ocean Eye surveyed divers on their willingness-to-pay and compared those numbers with the marine wildlife they encountered during the course of a trip, finding that each diver would pay an additional $7 USD a week. It’s a manageable additional cost for someone who may have travelled from halfway around the world for a holiday, but when it’s added up for all of the participants in a trip and converted to local currency, it can represent a windfall for coastal communities. The app will also have big-ticket items, like blue whales, which may garner $50 or more per sighting. Ocean Eye also plans to put caps on payment for species that sometimes travel in large numbers, so that the experience of running into, say, a pod of two hundred dolphins does not represent a financial liability. Sightings and numbers of different species will be tracked in the app for payment purposes, but that data will also represent a trove of citizen-science information that could be used for everything from population studies to data-backed dive guides from rental shops and tour companies.

Other research supports Ocean Eye’s contention that people are willing to pay for a more biodiverse tourism experience. An Oceana report published in 2008, for example, found that 76 percent of divers would be happy to pay more if they had a better chance of seeing sea turtles during a dive. The report found the average dollar amount people would pay for that experience to be just shy of $30 USD.

When it comes to distributing the funds, Ocean Eye is very deliberate about there being no top-heavy rules coming from their side of the equation. “Giving money to communities can have unintended consequences,” Tolvanen said. As such, Ocean Eye wants to meet communities where they are at when it comes to making payments. “We don't want to set up any rules because each place is different.” The goal is to not disturb the local power structures that already exist in a place. The only stipulation is that there is a local committee that takes the money and decides what is done with it rather than it being paid directly to a village head or other individual leader. “It's all left for the people to decide” what is done with it, Tolvanen said.

In regards to app development, the key is security of the data collected, as well as a robust finance control system that is both easy to use and secure. They may also be working with some new collaborators found through the Digital Makerspace as the project moves forward, and are particularly interested in finding a developer. The Ocean Eye is running a crowdfunding campaign to raise $27,000 and complete version 1 of the app and begin testing; those interested to support can donate online until January 11, 2020. Follow their progress on Instagram @ocean_eye_app.

Even as the team is working toward launching the application in communities set alongside diving destinations, there is plenty of room for growth – and positive change – away from the water too. The same approach of putting a dollar price to wildlife sightings could be applied to other habitats in the future, such as forest communities. But with oceans being so vast and so comparatively neglected in terms of conservation efforts and the establishment of protected areas, it seemed like the best place to start. “We feel this is where the most action is needed besides simply being passionate about preserving the ocean’s beauty while finding a balance with the people that economically depend on it,” said team member Mareike Dornhege