The Fight to Save Hawaii's Most Important Tree

The ‘Ōhiʻa Challenge: Detect Rapid ‘Ōhiʻa Death before it kills and spreads

When the first Polynesians landed on the shore of Hawaii's Big Island around 400 CE, one plant dominated the vast, varied landscape. Everything from the hardscrabble lava fields along the ocean’s edge to up to over 10,000 feet on the slopes of Mauna Kea was covered by a grey-green-leafed tree studded nearly year round with spiky red blossoms. The tree, which was named ʻōhiʻa lehua, became just as dominant in both the day-to-day and spiritual lives of Hawaiians. Life on the islands without it would have been unthinkable.

Today, the tree is no less vital to life on the islands. “Since it is a dominant tree in the forest, it helps bring the rain,” said Corie Yanger, of the University of Hawaiʻi's College of Tropical Agriculture and Human Resources. Forested areas at higher elevations are where clouds tend to hang on, causing much of the rain received on the island to fall on places where ʻōhiʻa grow. “Without the trees present in that space,” Yanger explained, “the water would probably runoff and there would be a lot of erosion, and the water wouldn't filter down into aquifers.” Not only do a lack of trees result in untold ecological damage, the municipal water supply would be at risk too.

But the tree, and the complex ecologies, culture, and society that rely upon it, are at risk. Two new species of the Ceratocystis fungus—which were given Latin names meaning "destroyer of ʻōhiʻa" and "overturner of ʻōhiʻa,"—are the culprits in what’s called Rapid ʻŌhiʻa Death (ROD), a disease that’s decimating trees across the Big Island. “Right now what we're looking at is hundreds of thousands of ʻōhiʻa trees that have died on Hawaii island,” said Yanger. The infected area is spreading across the Big Island, and now the fungi were recently found on Kauai too. 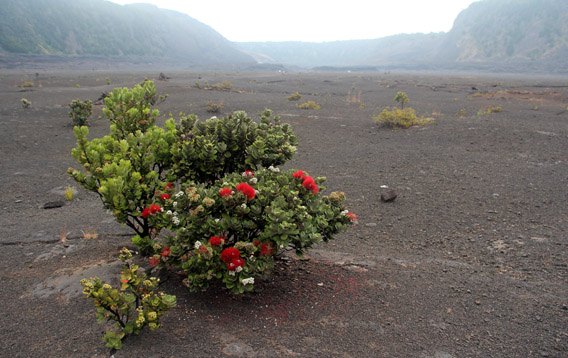 Yanger (who focuses on community education and outreach efforts around ROD) and her University colleagues are working with ecologists at Hawaii Volcanoes National Park and counterparts on the mainland to figure out management strategies that limit the diseases’ spread. But while there are efforts underway to find pockets of resistance to ROD, and to better understand infection vectors, there is so much that is not known, or that researchers aren’t able to do when it comes to diagnosing, managing, and mitigating the ʻōhiʻa-killing fungi. That’s where the ʻŌhiʻa Challenge can make a huge difference: the innovation competition, presented by Conservations X Labs, the Department of the Interior, and the National Parks Service, wants to spur new cross-disciplinary innovation with the promise of a $70,000 prize bag.

“We hope this challenge leads to innovation and the development of more effective tools to detect the fungal strains causing Rapid ʻŌhiʻa Death,” said David Benitez, an ecologist with Hawaii Volcanoes National Park. “We also hope this challenge will highlight this important issue to a global audience, and pave the way for more effective management and eventual elimination of ROD, thus protecting precious Hawaiian natural and cultural resources.”

Open to submissions through April 8, 2019, the Challenge is looking for solutions in three broad fields: field-based detection, landscape-level detection, and identification of infection pathways. Currently, there is no good way to diagnose ROD until the disease is quite far along, and the crown of the infected tree begins to turn brown. “There’s a window there where a tree might appear healthy that’s already been infected,” lasting between six months and a year, said Thomas Harrington, a leading Ceratocystis researcher at Iowa State University. “Identifying them that early might help for management perhaps.”

An invasive ambrosia beetle has been identified as the carrier of the fungus, but much remains unknown about the ways that ROD spreads. There is currently a research project under way to use Rotorod samplers, regularly used to track pollen levels, to take air samples surrounding infected areas, “and we developed a real highly sensitive molecular technique to identify the fungus in those air samples,” Harrington said. It’s believed that wind is a vector too, but more research is needed to fully understand how the fungus is infecting new trees. 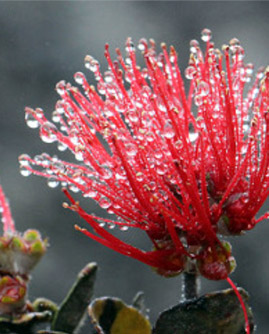 An ‘ōhi‘a flower with both stamens and pistils

ROD is ripe for the kind of intra-discipline thinking fostered by CXL’s Digital Makerspace Platform. As Brian Gratwicke, who has worked on field-identification technology for diagnosing chytrid fungal infections in frogs pointed out, ROD, chytrid, the white-nose fungus affecting bats, and other bacterial disease in plants share many similarities despite the differences in their host species. Rather than thinking of chytrid as a frog issue, he said “it's a fungal disease that we're working on for sure—that's what it comes down to.” As such, people working on one fungal disease can learn a lot from biologists working on similar infections. Gratwicke himself attempted to develop a tool for diagnosing chytrid in the field that used ultraviolet light after learning that white nose was diagnosed in bats by shining UV light on a bat’s wings.

“There has never been an instance where a cure for a disease similar to this has been found. We're not holding out for a cure—we're hoping to be able to control it to a management point,” said Yanger. “That's what we're hoping will come from this challenge: that folks who are experts from their fields will be able to think up of ways to help combat this disease.”

“There will always be some mortality. It’s possible that it could be contained. It’s possible to have it at some manageable level where it’s not killing so many trees in any one year. And the trees are reproducing, and the young trees tend to escape the disease, so it’s not like the ecosystem is going to be wiped out.”