Unknown profit model, Unknown IP model, Market Shaping Phase, Open to new members
Other Other Other Other
Follow Request to Join
Solving the Caribbean Sargassum problem by preventing them from piling up and decaying.

Record-breaking amount of Sargassum is in the Caribbean resulting in the highest problem ever gotten. The major problems it has brought are it piles up on beaches, sometimes many feet thick and begins to decay. The hydrogen sulphide that gets released smells like rotting eggs and many resorts had to close their doors. Since the species are Sargassum natans and Sargassum fluitans float they block sunlight creating dead zone beneath them because plants under need sunlight to survive and the clean-up and removal of sargassum is an expensive task. This project proposes new way to solve this problem. The best solution is a long term solution but the Caribbean economy depends upon tourism that it needs a quick solution other than cleaning up the algae on normal or standard method. Since the basic problem is for the algae float, pile up and decay: we will give it no time to pile and decay by using a device seen above. Since the algae have considerable volume and we have the advantage of the current, we use the green structure to direct Sargassum into the red blade. The green structure is stationary fixed with the ground depending on the direction of the current of the shore. Then the blade will force the Sargassum to be collected in the holding storage made up of a flexible hard net that can pass the water but not the algae. The storage will prevent the Sargassum from decaying. Then regularly we change the holding net.

The main concern of this product is how the blade is powered and the shear force of the wave. We have two option solar rechargeable batteries or as I said above we have the advantage of the current. The current can be a source of mechanical power. We can use this mechanical power to run the blade without using any additional power. But if the current is not strong enough using a rechargeable battery is feasible. The design will be modified after on sire inspection. The solution to withstand the shear force is using a special anchor technology which is frequently used by many parts of the world in beach structures. This mechanism is known in its low cost and high strength mechanism especially for sandy shores. The number of anchors, the thickness of anchor and other relevant factors will depend on the wave energy of the beach. As seen in the picture above there is space that is between the devices for the aquatic animals to pass through. Since the suction is heavy only near the blade live aquatic animals will not be sucked in. My calculations gave me if we clean/ sort 35,000 gallons(US) in 8 hours we need a minimum flow rate of 73 gallons(US) per minute turbine for 20-inch intake line. Since there are multiple devices installed in the Caribbean beach it is enough to get the job done. From my research, this much sargassum will be cumulated in a matter of days and from my calculation every week the net must be changed. 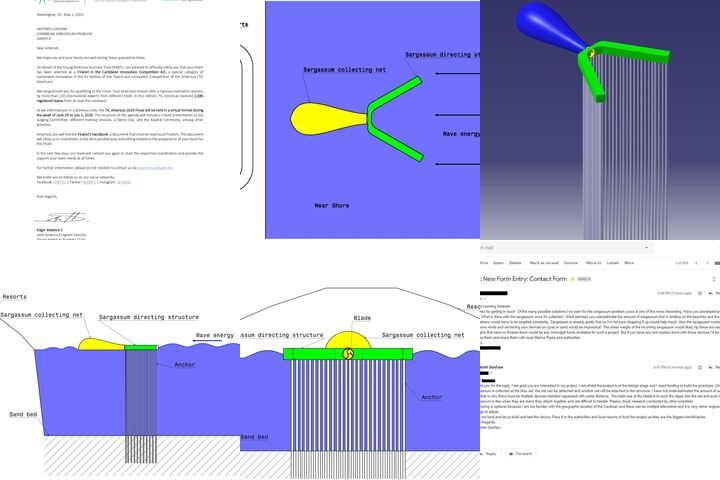 I am assuming that the current is the one which drives the algea and we can use the current to our advantage.

Sargassum is a natural, even essential, part of the Caribbean's ecosystems but these recent blooms are having a devastating impact on the region, both ecologically and economically. Many tourist areas and islands were innundated this year. It piles up on beaches, sometimes many feet thick and begins to decay. The hydrogen sulphide that gets released smells like rotting eggs and many resorts had to close their doors. Hydrogen sulphide is dangerous to humans in large quantities, causing headaches, dizziness, nausea and even asthma has been reported in some local communities. It is also extremely corrosive to metals and concrete. Barbados was hit particularly hard, and even found dead dolphins stuck in the weed, as well as turtles and many other fish species. This project is Finalist in the TIC AMERICAS Challenge http://yabt.net/news.php?n=tic-americas-2020-finalist

Currently, I have managed to come up with a great idea and design. the next step will be building the prototype. The design has many considerations. The first critical factor is building a low-cost structure that can withstand the wave energy of the shore. A wave’s energy is proportional to the square of its height. This is called its “potential.” And it is very critical in this design because 1-meter-high waves disperse 10kW of energy per meter of beach. This problem can be managed by using low-cost anchoring mechanism in sandy becahes. This mechanism has proved its efficiency in Dubai, the United States and many different countries. Even if it is a complex design because there are many factors in the calculation of the shear force of surf, I have managed to do the design. But it involved lots of assumptions because the required data need on-site measurement and testing. This is a minor difficulty and will be solved on solid data input.

I need funding to build the prototype and I will need a connection to local resorts to demonstrate its efficiency.